On March 5th, Irish was dead dog walking: Within hours, nay even minutes, it would be the needle, gas, or maybe ol' Sparky hisself. But just in the nick of time some nice people saved him, putting him in a foster home until hopefully someone adopted him.

On March 21st, Martha the Kind adopted Irish and it's been work, work, work for the last four months gaining his love and trust. He tolerates Molly and he's not too keen about me, but he's totally in love with Martha (the Kind).

Yesterday, he reached a huge milestone in his doggie rehabilitation: He graduated from eight grueling weeks of canine college! 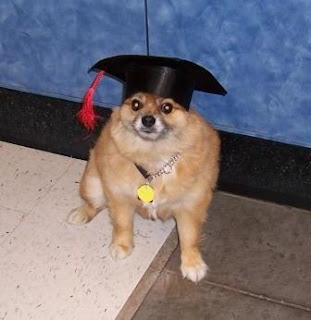 Class of 2008
Irish walks to the leash, and he knows commands like "Sit", "Stay", and "Don't chew on that bone, honey—that's Charlie's leg and it hurts him a lot!" Nevertheless, that's my boy!

Well, no he isn't. He's Martha the Kind's boy, and she deserves it. Irish has taken a lot of the pain away of losing Punkers, and for that I'm glad. 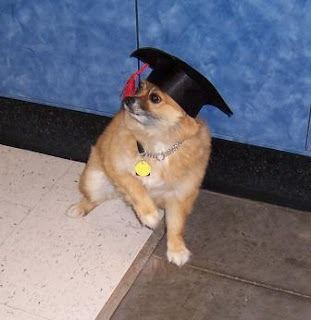 Is that rhubarb stuck to this stupid hat?
Posted by Charlie at 2:32 PM 10 comments: