WORM'S COMMENT: Here are some quotes I liked from recently-read books.

There are many crimes in the Irish lexicon, odd actions that in the UK wouldn't even rate a mention, but here are nigh on unforgivable.

Silence or reticence. You've got to be able to chat, preferably incessantly. Making sense isn't even part of the equation.

Not buying a round. You might think no one notices, but they do.

Having notions, ideas above your imagined station.

Neglecting the grave of your family.

There are others, such as having a posh accent, disliking hurling, watching BBC, but they are the second division. There's a way back from them, but the first division, you are fucked.

Tropper is the opposite of Bruen; he writes very good and very funny novels about dis-functional people and families, but he throws in zingers like this one from his protagonist, Joe Goffman:

To err, as they say, is human. To forgive is divine. To err by withholding your forgiveness until it’s too late is to become divinely fucked up. Only after burying my father do I realize that I always intended to forgive him. But somewhere I blinked, and seventeen years flew by, and now my forgiveness, ungiven, has become septic, an infection festering inside me.


CHARLIE"S COMMENT: I "intended to forgive" my father for the shit life he gave our family, especially when I saw him sitting so alone in a warehouse for unwanted old people. But I never said a word and, when he died, he died alone, unforgiven, and very sad. And when I think of him like that, it saddens me too.

Conroy is the author of the novels The Great Santini, The Lords of Discipline, and The Prince of Tides, among others. My Reading Life, however, is a non-fiction book about books—those that influenced Conroy's reading life, writing life, and life in general. I could say that the book is more about Conroy and his own books, but I won't because that would make this a book review. Rather, I'll leave you with a quip he made while living in Paris:

France is the only country in the world where friendliness is one of the seven deadly sins.

I can't thank beautiful Pat enough for turning me on to Michael Bublé. Go ahead, people, laugh your shorts off at me because my head resides in the musical sand. There is an excellent reason for that: 95% of "music" produced today is crap.

Bublé, however, is a throwback to the days when us older folks were stumbling around in the desert following Moses. We may have been lost directionally, but we had the greatest side men around to entertain us at the club tent every night (except Friday and Monday). Not many people know this, but we finally found Israel by following Tin Pan Alley.

Geez, sometimes I'm so full of shit I amaze me.

So why does this video have such an affect on me? Because it makes me FEEL GOOD. And each time I listen to it with a REAL orchestra I FEEL GOODER still.

I think all of you should take 4 minutes of your life, watch the video, and FEEL GOOD along with me. 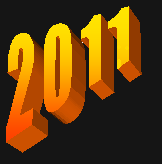 2011. It looks kinda dramatic, especially when you stand back two or three miles from your screen and take into consideration that I didn't have the faintest idea what I was doing when I designed it. Yay me.

Happy New Year to all my friends, foes, and followers!

* * * * *
I'm known for a lot of things (like designing a dramatic-looking 2011 when I hadn't the faintest idea what I was doing), but humility isn't one of them. With that in mind, I'm proud to receive the Rambling Beard Award for 2010 from my long-time friend Kim Ayres.

[Only kidding, Kim: I'm truly honored to receive your award. By the way, I finally have an address for my crypt so you can send along the "Sorry You're Dead" greeting card when the time comes. Address it to "Occupant" . . .]