I've never thought about it before now, but that's a pretty hefty statement in the sexist department. I mean I've never heard, "Oh, that's just an old husbands' tale." I have to believe that many super- stitions, most disinformation, and the bulk of nonsense originated with men, simply because men are idiots.

Why would a woman, for example, pass this nugget of numbskullery down through her female line:

Here's another example of dipshittery:

"If you sit on the toilet too long you'll get hemorrhoids." Baloney squared. I knew a fellow who had a terrible case of hemorrhoids, but I'm pretty sure he got them from sitting on a hard barstool all day long.

Personally, the toilet has always been my friend. Not only have I done my best thinking there, I've always used the quiet time to read and study, uh . . . stock and mutual fund prospectuses. I'm proud to say that our entire financial future has been planned on the can, and Martha will be retiring at the golden age of 97 with a treasure trove of two thousand pork belly futures.

This week, however, la toilette won't be so friendly. Utilitarian as hell to be sure, but hardly a place I want to sit for too long—who knows, I might get hemorrhoids.

On Thursday, dear readers, I will undergo my 326th medical test since 2003—not one of which I've asked for. It's a colonoscopy, and it requires all 45 feet of my intestines to be sparkling clean and springtime fresh. So I must spend Wednesday night and Thursday morning "cleansing" by drinking two litres of terrible tasting liquid and another litre of water.

Cleansing, my ass. Using the scientific theory of massive water pressure, we're talking about an explosion. Boy, is the dog gonna love this one, but I've got me all worked up about it.

Maybe I should take a nerve pill, settle down, and just hope that everything comes out alright.

Okay, accuse me of anthropomorphization. Accuse me of anything, as long as it's a long word. But around our childless home our critter is our kid. Go ahead and laugh at me, call me eccentric like the English—I. Don't. Care.

Lousy photographer that I am, I was attempting something artsy-fartsy with this picture. Something along the lines of Michelangelo's Pietà, except Martha is no longer a virgin.

For those who haven't visited this blog before, Martha is on the left and Irish is on the right (he has red hair and freckles around his whiskers). 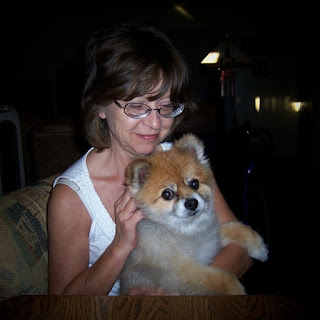 It breaks my heart to think of leaving them behind.
And if there is time for goodbyes, what do we say?

Some of you occasionally blog about the weather in your part of the world (except for my Canadian friends) (*snort*), and I don't say much about the desert, either. I mean, there's really nothing to say when the daily forecast is "sunny and hot," except during the two weeks of winter when the forecast changes to "sunny and a bit cooler."

Last evening, however, was an exception. We had a haboob, a super intense "dust" storm. Watch it roll into town in this silent time-lapse video.

The Phoenix Haboob of July 5th, 2011 from Mike Olbinski on Vimeo.

That isn't dust, folks. It's plain old dirt, which has had a whole inch of rain to hold it down since the first of the year. The only good thing about the dirt haze today is that you can't see the pollution.

Haboobs occur during the monsoon, which is July and August. Normally, we have a dust blow followed by lightning, thunder, and a torrential rainstorm. When we first moved to the desert in 1997, the monsoons were spectacular. But no more. For the past five or six years, the rainclouds quickly dissipate because we Phoenicians have constructed a heat island made of cement and glass. It was 118º (F) the other day; the rain evaporates, the clouds break up, and we're shit out of luck for water.

Here is a still shot of the Haboob, which is an Arabic word: 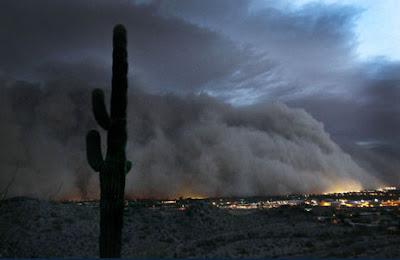 Okay, that's enough about the weather—I've learned to keep it on the back burner from my friends in British Columbia, Alberta, Manitoba, Ontario, and Quebec.
Posted by Charlie at 4:18 PM 17 comments:

Curriculum: Where I Live

10 Things I Hate in My Mouth