If you like haiku (and who doesn't?), then take a moment to read Barbara's poem, a short bad haiku about the sorry state of my wardrobe and the weather. Despite her nineteen-syllable title, I believe her seventeen-syllable haiku is a lament, a cry of desperation from a woman who lives in Calgary, Alberta, where winter and hockey never end.

Then again, I'm probably full of shit. As usual, especially when it comes to poetry.


[Barbara is the talented writer of Bad Tempered Zombie and a contributor to the The Bookworm Collective, a consortium of Canadian, uh, book reviewers.]
Posted by Charlie at 1:01 PM 8 comments:

Do you ever have one of those days when you don't feel like getting out of floor? 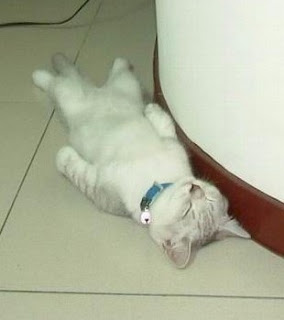 (Cats are so dramatic sometimes)
Posted by Charlie at 7:21 PM 5 comments: 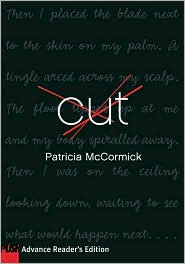 Callie, 15, is a "cutter"—she cuts her arms with her mother's Exacto craft blade and wears long sleeves to hide the scars. When she inexplicably cuts her palm, she ends up in Sea Pines, a residential treatment facility. For the first 50 pages, Callie talks to no one—not her therapist, her Group, or any of the attendants—no one. As one super-jerk reviewer said, the story is told from "inside Callie's own head." Unwilling to allow anyone to help her help herself, the story is mostly about her group-mates: one very obese girl, two anorexics, two drug addicts, and later on another cutter, Amanda, who proudly displays her scars and talks about the "exquisite pain" and "control" of cutting. Amanda, a street-wise smart-ass, tells Callie that spraying the cut with hairspray or rubbing alcohol makes the scar more pronounced, "but that hairspray works the best."

McCormick writes well—she ought to, considering she spent three years researching and writing this tiny book—but the term "mental illness" is never mentioned. Not once. On page 4, Callie tells us about Sea Pines from inside her own head,

"We, by the way, are called guests. Our problems are called issues. Most of the girls are anorexic . . . Some are druggies . . . The rest, like me, are assorted psychos. We're called guests with behavioral issues. The nurses are called attendants. And the place is called a residential treatment facility. It is not called a loony bin."

Double that previous "Swell." Callie is a psycho in a looney bin. She does not have a mental illness, and she is not a patient in a hospital. We learn nothing about the etiology (cause) of Callie's cutting until we're ¾ through the book: **SPOILER** Callie cuts herself as punishment for causing her little brother's asthma. Can you say lame? **END OF SPOILER**

Cutting is a serious illness, but this book is not the place for either a girl or a parent to garner any information about it. Despite three pages of "Raves for Cut" by idiot reviewers, I believe a more appropriate title would be Nancy Drew and a Case of Issues.
Posted by Charlie at 7:51 PM 8 comments:

I have been meaning to review this film for about three weeks, but I'm glad I waited because it is apropos of my last post, Milepost #62. 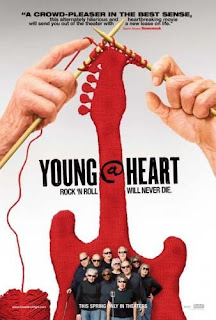 Stars: The Young at Heart Chorus


Northampton, Massachusetts, a small, pristine town fifty miles east of the New York state border and three miles directly north of Easthampton, is home to a twenty-four-member group called The Young at Heart Chorus. Young at heart, but not chronologically: the average age of the chorus is 81, ranging from 72 to 93. Preferring classical music and Broadway show tunes, this documentary follows the group for seven weeks as they learn and practice new songs for a show at the Northampton Auditorium—and a singing tour to Europe to follow (their second).

Yawn, snore, dribble down your shirt, wake up and go to bed.

Not on your life. Bob Cilia, 53, music director and founder of the group in 1982, has a surprise for these folks. No Brigadoon or Oklahoma! this time around: the new songs are by Sonic Youth, Radiohead, Coldplay, and other groups these folks have never heard of, much less sung. But stoic Massachuttsians that they are, they put their hearts into each and every song.

And that's really what this film is about: the people. Interspersed with scenes in the practice hall, we meet several choir members indvidually. Young at Heart is all about the love of singing, of group and camaraderie, of usefulness, of the pieces making a much larger whole. Two people stand out. Eileen Hall, 93 and an import from England, is an unabashed flirt. And Fred Knittle, 81, retired from the group but called back for this performance, is both a scene and show thief (and my favorite). Who can resist a line like, "We're lost, but at least we're making good time."?

Cilia is a tough task-master, but he also loves his work. When one woman was asked what she does when Bob yells at her, she replied that she yells back. When practices and rehersals increase from two to three a week, no one complains—it is all about the group. During the seven weeks of filming, two members die (as the elderly are wont to do), but no one gives up—it is all about the group.

The show goes on, and it's a stunner. Eileen opens the show with the Clash's "Should I Stay or Shoud I Go?". The sold-out crowd is stunned. Then it's James Brown’s "I Feel Good!" and the crowd is on its feet. The chorus pulls off Allen Toussaint’s "Yes We Can Can" without missing one of the 127 "Cans." Fred, stout and with sputtering oxygen, does a poignant baritone solo of Coldplay's "Fix You" that is difficult to forget.

This entire film is difficult to forget because, as old and diseased as the body may get, our heart can stay as young as we want it to be.


[Many thanks to Wandering Coyote for her review of this film or I would not have known that it exists.]
Posted by Charlie at 9:57 PM 9 comments:

On June 2, 2009, I will be sixty-two-years-old. "So who the hell cares?" you're mumbling at your computer screen. Well I do because it means I will be an official old fart according to the Social Security Administration—and therefore eligible for early retirement.

“But you’ve been retired for five years!” you exclaim.

That’s true, except I’ve never been paid to sit on my retired ass for the last five years and do anywhere from little to nothing whilst sitting on it.

And the money is for a good cause, too. Starting July 1 (for June), the eagle will shit (an old military term for payday) straight into Martha’s savings account for her retirement or bingo, whichever comes first.

So just don’t sit there: congratulate me for both my anticipated largesse and my entry into old fartdom.


NOTE: If anyone needs me for the next month or two I'll be busy filling out application forms—just like the banks did. **wink, wink**
Posted by Charlie at 12:28 PM 14 comments: 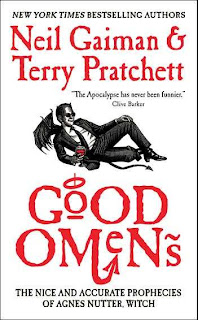 
How the hell do I review a zany book about Arma-geddon, for heaven's sake?

I can't very well recap the story because that would make me as crazed as Gaiman and Pratchett. I can, however, say there are two main protagonists: Aziraphale ("An angel and part-time rare book dealer"), and Crowley ("An angel who did not so much Fall as Saunter Vaguely Downwards.") (Quotes are from the book.) Along the way we meet a host of other protagonists and antagonists (this is war, you know), most of whom are clueless: The Apocalyptic Horsepersons (one is female), Anathema Device, Shadwell, Madame Tracy, Newt Pulsifer, Them, and the Antichrist (who was, uh, misplaced at birth by Sister Mary Loquacious, a nun of the Chattering Order of St. Beryl).

Perhaps it would be much better if I jot down some of my general impressions of the book.

Good Omens is irreverent but never sacreligious. God neither shows himself nor speaks, except through a being named Metatron. The authors never take potshots at any one religion—unless one considers televangelicalism a religion.

To me, the latter was one of the funniest bits in the book because it was dead on correct. Marvin O. Bagman, an alumnus of San Quentin and host of Marvin's Hour of Power, has a knack for getting people to send him money. Having recorded an album of songs he'd written and sung to stolen country tunes, Jesus Is My Buddy was advertised every four minutes. Tunes like, "Jesus Is the Telephone Repairman on the Switchboard of My Life," and "When I'm Swept Up by the Rapture Grab the Wheel of My Pick-up."

Even though this is brilliant satire, there are people and groups who will object to this book (wasn't little Tommy Cruise baptized "Metatron" in the Church of Scientology, one of the world's great religions?) That's too bad because Gaiman and Pratchett aren't wacky for 369 straight pages; they discuss, through various characters, the nature of the Universe, of God, of good and evil, of free will, and most intriguing of all, the question why must there be an Apocalyse that will penalize everyone, both good and evil?

On the downside, I read this book in bits and pieces. Too much humor at one time became overwhelming and less funny, just as I have to take breaks from a sad book because of emotional overload. I also didn't like the small, very-serif font and the even smaller footnotes.

I give Good Omens four out of five stars, which is very very good but not stupendously great.
Posted by Charlie at 10:57 AM 7 comments:

MISSING PERSONS: So where the hell is everyone? Is blogging no longer an international sport? Have I been Left Behind (as Tim LaHaye asserts) if I'm naughty? Perhaps I've forgotten that people have lives to live. Maybe my posts have gone to pot. Whatever the reason, I miss all you missing persons. Inquire within.
Posted by Charlie at 11:55 AM 13 comments: