I breathe, therefore I am.

I win skirmishes as well as battles—even though I know the war is being lost, that there is no way the war will be won.

I fight, therefore I am.

Quality of life. While quality deteriorates, there is still plenty of life all around me.

I live, therefore I am.

I laugh, therefore I am.

I have Martha, the dogs, and all of you incredible people in Blogaritaville.

* Wandering Coyote here.  Martha asked me to post this, a direct quote from Charlie.

Charlie was admitted to the hospital Monday night, September 13th and is tentatively scheduled for discharge on Monday, September 20th but not looking too good.

Will keep you updated.
Posted by Charlie at 7:18 PM 29 comments:

Poop from the Pope

I wrote this piece on June 13, three months ago today. I posted it here, and it was picked up here. The problem is, I never posted it here here because on June 14 I began my 2½ hospital stay.

I seldom write about religion, but this transcends religion and enters the realm of the truly outrageous.

As the celebratory "Year of the Priest" draws to a close, the pope had this to say on Friday, June 11 [AP Newswire]:


“It was to be expected that this new radiance of the priesthood would not be pleasing to the ‘enemy’. He would have rather preferred to see it disappear, so that God would ultimately be driven out of the world.”

The term “the enemy” is a traditional Catholic way of referring to the Devil.

Translated from the traditional gobbledygook, the pope is saying the devil made the pedophile priests do it so people would turn against God, whom we all know is represented on earth by the One, Holy and Apostolic Roman Catholic Church.

If anyone knows about pedophiles in the church, it is Joseph Ratzinger (his real name, or Bennie for short). From 1981 until his coronation in 2005, he was the Prefect of the Congregation for the Doctrine of the Faith. The Congregation is a direct descendant of the Supreme Sacred Congregation of the Roman and Universal Inquisition, formed in 1542. [From Wikipedia]

Yes, that Inquisition, still alive and well today, rooting out evil and heresy wherever it is found. To believe that Bennie didn't know about the thousands of pervo peds within his ranks for twenty-one years is a crock of pope poop. German hardliner that he is, it was his job as the Inquisitor to defrock these sickos—not play 52 card shuffle with them. But that, of course, would have tarnished the church's impeccable image and cost a lot of silver coin. About thirty of them.

Understandably, the thousands of victims of pedophile priests aren't very happy with Bennie's celebratory speech. Ruined lives, theft of innocence, and betrayal by a trusted adult cannot be dismissed and forgotten by such an idiotic statement by Commander-in-Chief Ratzinger.

Still, people flock to his church like bewildered and compliant sheep.

I'm not one of them.

Curriculum: Believe It or Not 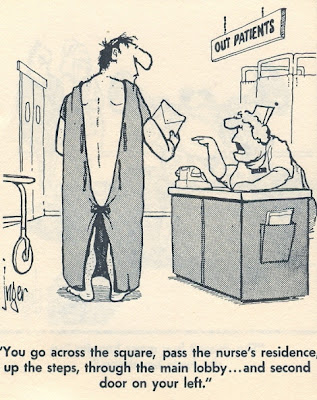 How in the world of hospital fashion did this schlump get a johnnie with a tie in back?

To all the rest of us who never get a tie:

Some women topless dance,
Through hospital corridors
I bare-assed prance.


* * *
Charlie Goes to the Doctor
A Fable
"Holy shit, Doctor, I think I have Diversion of the Spleen with Morbid Aftermath! And if that's not bad enough I have a sniffle, and you know how prone I am to Chillblains with Frozen Consequences!

"You've been reading your Guide to Every Disease, Disorder, and Discomfort Ever Known (and Not Known) to Mankind, Complete with Handy Checklists, Charts, And Cheat Sheets, 89th Edition, Revised again, haven't you, Charles."

The doctor was really nice when he threw me out of his office with instructions to never come back. He even sent along a note, stapled to my shirt, to Martha:

Here is a prescription for Charles.

1. PLEASE throw away his Guide to Every Disease, Disorder, and Discomfort Ever Known (and Not Known) to Mankind, Complete with Handy Checklists, Charts, And Cheat Sheets, 89th Edition, Revised.

2. Better yet, have a bonfire for it with kielbasa-on-a-stick and a little potato salad.

3. Put him to bed—preferably in a hospital johnnie with no tie in back.

5. If he happens to get bedsores then, for the first time in his life, he will really have something to complain about.

With utmost compassion I am,

MORAL OF THE STORY: If you haven't got it, don't complain about it. And be thankful.
Posted by Charlie at 6:13 AM 31 comments:

A Second in My Life

Philip Dodd, in his post Memory Glimpse — One Second in Your Life, asks:

"If you had to remember just one second of your life, which one would it be? By 'remember' I mean the full detail of that one second. Every last little bit of it, in high definition. How would you go about choosing such a moment? . . . Maybe it's one of those instances in your life that you have no choice but to remember."

This is my response.


* * *
It was sometime in June 1988 and I was in the throes of alcohol “treatment.” Throes, because it was painful work, attempting during endless group sessions to look at me through sober eyes. As snippets of the previous twenty-five years constantly popped into my mind, I liked myself less and less. “No wonder the only ‘friends’ I ever had were other drunks like me,” I thought, not in self-pity but stating a truism.

Both staff and group members could tell that I was struggling with me, and to assuage my feelings of guilt and shame they repeatedly told me that I had the “physical disease of alcoholism.” Bullshit. That was The Great Escape clause and I wasn’t having any of it (and I still don’t). It is only right, after a quarter of a century of chaos and mayhem that I caused, that I feel remorse for my behavior.

One bright spot of treatment was the desert. The Mojave, in southern California. At five a.m., when I sat on the patio in just my boxers—smoking, thinking, and watching the sun come up. It was my first-ever time in a desert (I lived in Denver then, not the neighboring Sonoran like now), and I was fascinated by the trees and bushes and flowers and birds—

—and the hummingbird. The "one second in my life." 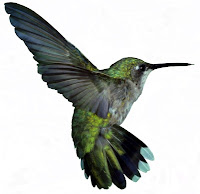 There were three of the tiny creatures flitting around red-tinted blooms searching for nectar. I was amazed by their aerodynamics: zoom here, zoom there, stop on a dime, hover like a helicopter, fly backward, dive bomb like a kamikaze and then pull up at the very last moment, their flapping, humming wings a blur.

Time is man-made, so it doesn’t matter whether it was one second or several of them. One of the little birds flew within several inches of my face and hovered there, one eye locking onto mine as we stared curiously at each other.

The hummingbird had a message for me that I will not, cannot ever forget: “Everything will be alright.” No, it wasn’t a basso profundo voice like James Earl Jones's, but a feeling. A feeling I will not, cannot ever forget: a sense of warmth and safety, of acceptance and forgiveness, a feeling of HOPE where hope had never been before. “Everything will be alright” was like a hypodermic shot to my broken heart, and thereafter I never gave up on myself or my recovery. Receiving a message from a bird sounds a bit like crackpottery, but looking back after twenty-two years, everything has been alright.

Like Philip says, it's one of those instances in my life that I have no choice but to remember.

Nor would I if I could.


* * *
It is said that theft is the sincerest form of flattery (or something like that), so I've stolen this from Philip: "So - One Second In Your Life - imprinted on your brain. Now, tell me about yours...."