I've been thinking about pain. Physical pain, like Attila the Mom is experiencing (she broke her ass a week or so ago, the poor clumsy thing). Personally, I don't have any physical pain, but I think about it for lack of anything better to do.

Like I was thinking about the pain scale the nurse fills out in the hospital after all the blood is mopped up and the screaming has died down to a low moaning.

The purpose of the scale is to give the nurse and the staff an idea of your pain tolerance before they lay on the heavy-duty pain meds. Nice idea, but it's one of the most subjective exercises I've ever done. And to make it worse, here in Arizona (where we have an excessive amount of pain due to the political climate), the scale is 1 to 10—giving us, and me, an additional four painful choices of pain.

I say subjective because how does one measure one's pain and assign a number to it? I've never had an arm suddenly fall off, so I don't know what 10-pain feels like. Likewise, what's 1-pain? Martha kicking my shin under the table for a socially unacceptable remark?

Have some manipulation, anyone? Drug addicts will always go for a 1. Ex-Marines and other macho men will choose 15. Some sufferers of fibromyalgia will pick all 10, just to be on the safe side.

"Not always. Sometimes I'm between a 3 and a 7—you know, the pain comes and goes."

"That makes you a 5 again," the nurse says, punching numbers into her calculator.

"Okay, but what happens if I hit 7? Do I get a second ibuprofen? Morphine in a drip?"

Honestly, I should be flogged for my full of shitness and messing with the overworked nurses. As a courtesy, I usually just say 5 and get it over with, even though I have no idea what 5-pain is like. Or 3-pain. Or 8-pain . . .

So where do you think you are on the pain scale, dear readers?

First, I'm thankful that I don't have pain, other than the usual that accompany old fartdom. Second, are you still my friend, Pam the nurse, or would you like to slap me silly?
Posted by Charlie at 4:00 PM 20 comments: 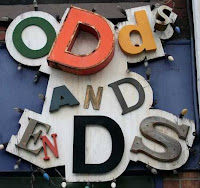 Due to the sparkling US economy, the company Martha works for has gone elsewhere in the world to find business. They finished a large contract in Panama City and have new ones in Brazil, Down Under, and

I looked up from my spaghetti and meatballs flambé (that's a nice way of saying dinner was burned) and asked, "Sylvania? Where, exactly, is Sylvania?"

"It's one of those countries near Yugoslavia. I have the address at work," Martha said.

"Do you mean Slovenia?" I suggested.

"Yeah, that's it! Geeze, Sylvania is where Dracula's from," she said, slapping her forehead while crunching on a forkful of spaghetti.

Martha is so darn cute when she's geographically- (and historically)-challenged. I didn't have the heart to tell her that Sylvania is a town in Finland where they make lightbulbs.

Some dark humor is always good for me, so I'll tell you about my funeral plans—that is, if  by chance I die one of these years.

Actually, I won't be having a funeral because I don't do church. Rather, Martha wants to hold a tasteful memorial service, so I've scribbled out a tentative plan for her.

2:25 p.m.: Attendees enter (estimated 3-4) and plop their rear-ends on a folding chair (consider a chair fee if anyone needs two or more).

2:35 p.m.: Glowing testimonials about me from the attendees.

2:37 p.m.: Since everyone is too shy to glow or testify in front of people, then Closing song.

Short, sweet, and out in fifteen minutes. That's the kind of memorial service I like.

You know, maybe I should leave the planning to Martha. She'll know what she wants to do.

Without an iota of doubt in my mind, I live in the dumbest state of all 52 of 'em (Iraq and Afganistan are the two newest). I live in Arizona, where

1. A gigantic wildfire is now burning down New Mexico. After two weeks, the fire is 10% contained.

2. The rainfall for the Phoenix metroplex has been one-half inch since January 1.

3. When it's this dry, most of the cities cancel their commercial 4th of July fireworks displays for fire safety.

4. The Arizona legislature doesn't give a shit about fire safety. This year, it passed a bill allowing the private sale of fireworks to individuals. No firecrackers, but plenty of stuff that flies into the sky. And burns the hands and faces off idiot kids. And start fires, especially if they tangle with all these tall palm trees.

5. Yesterday, the fireworks sales tents were setting up in the same locations where Christmas trees are sold—three weeks before the 4th of July. I wonder if the owners of these tents are members of the Arizona legislature; because of the sparkling AZ economy, graft has been down the past couple years.

The mood was subdued around here last week with the passing of Molly. Thank y'all from Martha and me for your kind comments. I think we all gave the little critter a nice send-off.

In the middle of the week we received a sympathy card from the vet with this inside: a double impression of Molly's paw print. And then the tears started again . . .

Martha will be on the trail very soon for another rescue dog. There are so many who had "good" homes and then got dumped when the housing house of cards collapsed. The poor creatures are so lost, lonely, and confused, just like Irish was when we adopted him. We'll letcha know when we have a new family member.
Posted by Charlie at 2:16 PM 26 comments: